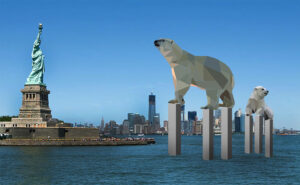 The sculpture I am presenting is titled  “The Great Migration” because the polar bears in my sculpture are based on an imaginary story about their migration. In this story, the polar bear family (consisting of a mother polar bear, and her child) cannot find food because the ice is melting where they hunt in the Arctic.  The news has reported that NASA has  discovered water and ice on the moon, and these bears hear this news and decide to try to get to the moon. They decide to leave the Arctic and make their way to Cape Canaveral,  Florida,  to hopefully get a chance to fly to the moon on the next rocket ship to have ice again. On route to Cape Canaveral the bears have reached the Hudson Bay,  and that is the location of my sculpture. The bears  are looking up at the sky in anticipation of their hopeful future.

I feel this sculpture is necessary because it will shake the world’s awareness about the dangers of climate change that is looming over humanity and most life forms. After all the scientific evidence regarding the dangers of climate change, not many people are taking it seriously. Melting ice, and sea level rise is happening right in front of our eyes for the past few decades. We need to address the problem to find solutions. I really believe this sculpture will gain a lot of interest, people will stop and read about the story, and contemplate the serious issue of climate change.

I chose to place this sculpture in the Hudson Bay in front of the Statue of Liberty so that more people will see it. It will enhance the entire scene due to the fact that it adds meaning and purpose to this iconic spot. The bears are on a temporary stop in the Hudson Bay on their way to Cape Canaveral.

The bears are standing on poles in the water to represent how the water level is rising.  There are three poles for one bear, despite the fact that the bears would balance better on four poles. The three poles are sending a message that the bears are having to create balance in difficult situations.  The poles also represent the delicate ecological balance humans find themselves in, where if we do not address climate change, humans will one day live on poles or go under water.

My sculpture is made with shiny stainless steel. I chose this material  because it is very durable and cost effective. The poles which will go inside the water will be made of concrete, which can withstand being in the water.  I believe its  upkeep should be easy.

This sculpture should be maintained for a long time. The sea level will keep rising as long as humans are not doing more to stop it.  We will be able to document the water level on the poles or when it reaches the bears. If one day the water level rises and covers the bears it will no longer be visible. This is the scenario we are trying to avoid.